The Future of Beauty 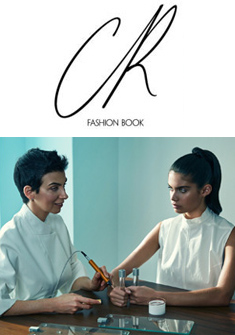 It's a fairy tale come true: A revolutionary new treatment that uses biophotonic light to restore the body from the inside out. Introducing the Cherin.

In the final scene of E.T., the friendly alien touches his illuminated finger to Elliott's forehead and says, "I'll be right here." His digit emits a supernatural white light as he speaks of spiritual union and shared love.

Light is key to many legends: it is considered to be on the side of goodness, truth, and immortality. We are a culture obsessed with the spotlight. But what if the very thing we love to see shining outwardly also holds the power to recover beauty from within? The Chiren represents the cutting edge of light therapy for celebrities and a cultural elite seeking a portal to the fountain of youth and vitality.

This new luxury light service is the invention of Johan Boswinkel, who explains that during Chiren sessions "the body takes only the signal that it needs to restore health." There are various "levities" of light, and the Chiren turns on a healing frequency, promoting the body's ability to regenerate naturally.

The idea behind the Chiren and the field of practice known as Biontology is that of helping the body to balance and heal itself. A session with the Chiren comprises a painless, noninvasive therapy in which a penlike sensor is applied to acupuncture points on the hands and feet. According to the Institute for Applied Biophotonic Sciences, human cells are already emitting natural biophotons, or light impulses - more than 100,000 biophotons per second. Using software to measure the energetic system at each pressure point, the instrument calculates the exact amount and frequency of light needed to correct imbalances, then delivers a surge of it through fiber optics, using two glass rods.

A dynamic play on opposites, the Chiren actually delivers the reverse frequency of whatever is throwing off the system. If the Chiren detects an excess of aluminum, it will deliver the light frequency opposite that which aluminum emits. It is like an instrument that tunes its player.

Prior to a session, the client is asked not to exercise, to avoid the release of endorphins in the body. Interestingly, practitioners say that endorphins will mask the sensor's readings, and the acupuncture points will not show imbalances accurately. The typical side effects of treatment are similar to those of a mild detox, including headache or fatigue, both of which are easily avoided with hydration.

New York-based Chiren practitioner Sondra Shaye, a healer for over a decade, considers it "one of the most effective treatments" in reaching the roots of well-being. "The body often appears healthy but masks deep internal issues that rise over time," she says. "The Chiren is directed to the inner network of cells, subsequently reducing a number of related outward symptoms that would normally be treated by pharmacology, which can cover up the deeper conditions." Treating core wellbeing results in an overall sense of youthful rejuvenation.

As well-being increases, so does a thriving and beautiful body. The Chiren is restorative, returning body processes to innate, optimal performance, ultimately unleashing the beauty for which the body was designed. This is the beauty that people slowly sabotage with cups of coffee, late nights, and hostile thoughts. Beauty specialists, for example, often advise that haircolor treatments are best based on a lock of hair from one's childhood, because childhood is where the physical essence resides. Similarly, skin may remember those subtle, wrinkle-free days, but most antiaging treatments attempt to alter outward appearance and halt what seems to be the inevitable, natural process of aging. Conversely, the Chiren works from the inside out, essentially charting a direct path to one's own internal Eden.

As Roald Dahl said, "The greatest secrets are always hidden in the most unlikely places." What we really want, and need, is not another beauty treatment to fine-tune our surface, but a process that reveals how good we already are and sparks the regeneration of that goodness. Humans have sought the secret to health and beauty for centuries, not considering often enough that it could be contained within. Now the Chiren shines a light on a future that can easily be.