The Clearings: Space Healers Use the Spirit Realm to Cleanse Apartments 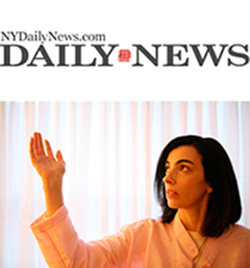 If your place just won't sell, maybe it's not the layout or the neighborhood. Maybe it's cursed.

In Your Home's Halloween issue, we featured paranormal investigators who check homes for haunting. That same week, we introduced statues of St. Joseph, the patron saint of real estate, whom house sellers bury upside down in soil to bring quick transactions. Some agents and house sellers swear St. Joseph helps. The paranormal investigators, though, have never been able to document a home's negative energy.

That's where space clearers come in. According to local spiritual healers, apartments tend to pick up the bulk of bad personal energy. The residue of a former owner plagued by illness, turmoil, vice, family tragedy, or other forms of sadness can impact a home's aura or vibe. It stays in the space. It also affects sales, and real estate agents have taken notice.

"There's no doubt I've walked into apartments and felt really bad energy," says Core Group Marketing's Mark Lynch, an agent who uses a space healer. "I can't say for sure if it works or not, but the more I've seen it done the more I become a believer."

In New York City, we found two major space healers working with agents and homeowners. Each has a different way of operating. Their results have proved successful.

A former corporate lawyer, Sondra Shaye realized her extreme sensitivities to people's moods and rooms extended to the realm of healing. She stopped practicing law, dedicating herself to the realm of spiritual energies.

From her Archangel Healing Light Center in Park Slope, Shaye offers group classes and individual sessions on self-healing. Her space clearing skills have international reach, with work done on homes in Los Angeles, North Carolina and Europe. In New York, she works with a variety of agents and homeowners.

"Nine out of 10 times I clear a space, it gets an offer within two weeks," says Shaye, sitting in her small healing center surrounded by statuettes of Jesus and St. Joseph and photographs of India's Sai Baba and Irish spiritual guru Derek O'Neill, all of whom she calls her guides.

"It even amazes me sometimes how this happens. There was a two-bedroom on the market for seven years. After the energy was cleared, they got an offer in 15 minutes."

Having healed spaces for nine years, Shaye uses a standard formula. First, she invokes all of her guides to rid the space of negative energies, entities and dead people. She spreads blessed water, asking negative spirits to leave the space and find their way to their resting places.

Then Shaye channels positive energy into the space. This, she says, allows good things to happen in the home for those who next occupy it. Afterward, she blesses the front door, asking that the home be protected.

"The owners still have to be careful not to bring anything or anyone really negative in with them," says Shaye, remarking that homeowners not selling their house should clear it every one or two years.

Afterward, she petitions St. Joseph to bring an easy sale beneficial to both seller and buyer. Lastly, she burns incense, chants and thanks her guides for blessing the space. The process varies in time based on the size of the home . . . .

Corcoran agent and lifetime Manhattan resident Amanda J. Young hires Shaye. She sees Shaye's services as protocol for her house-selling routine, something no different than photographing, staging and having floor plans drawn up for the apartments she lists.

"Of course, if the seller has any objection, I won't do it," says Young, "but this is something I think needs to happen to ease the transition for the seller and space to prepare for its next phase. It's something that helps me move the sales process along smoothly."

While it's difficult for Young to measure Shaye's success, she does notice a difference between a pre- and post-Shaye cleared space.

"The apartments are lighter after Sondra finishes," says Young. "It's like a heaviness has been lifted."
....

"People assume that New York real estate is all about bricks, mortar and dollar amounts," says Lynch. 'In a good market or bad, there is room for spiritual components."

While tough and cynical New Yorkers may turn up their nose at the practice of space healing, our Barbara Corcoran reports using energy healers, once called smudgers, when she ran her real estate company.

"You'd have to be careful which sellers you approached to smudge their apartments," says Corcoran. "But when they were open-minded, that meant they were easy to work with and things would go right. The majority of apartments where we did this moved right away."